nitowa
/
httxrp
Watch 1
Star 0
Fork 0
Code Issues 0 Pull Requests 0 Releases 0 Wiki Activity
You can not select more than 25 topics Topics must start with a letter or number, can include dashes ('-') and can be up to 35 characters long.
8 Commits
1 Branch
Branch: master
master
Branches Tags
${ item.name }
Create branch ${ searchTerm }
from 'master'
${ noResults }

httXrp is a proof of concept for a truly serverless web architecture. If serverless simply means “a server owned by someone else”, httXrp pushes that definition to its limit -or- perhaps its logical conclusion: What if that “someone else” never even intended that server to be used that way but can’t do anything about it?

1: Getting data into and out of the blockchain

Transactions on the ripple blockchain are allowed to carry up to 1kB of arbitrary data via the memo field. We can use this to store data of any size by building a tree of references between these transactions that can then be reassembled by reading them back from the blockchain. In order to generate these transactions a library called xrpio is used to send minimum-denomination transactions between two user controlled wallets.

Highly simplified, you can visualize the process like this:

2: Abstracting the webserver away from the web

Using tools like webpack, it is possible to condense even modern complex single-page-applications into a single html file. As xrpio is written in JavaScript, it is even possible to embed it into such an HTML file, the use of which will become more clear a few paragraphs below.

Since such a condensed HTML file is effectively nothing more than a long string it is possible to use xrpio to store them into the ripple blockchain and to retrieve them via a single identifying hash.

Superficially, this technique is limited to serving static webpages, as there can be no backend communicating with these pages without betraying the serverless premise. However, since it is possible to embed xrpio into such a “static” page, it is possible to listen for transactions on the blockchain containing valid xrpio hashes and to dynamically update the webpage’s content based on the stored data.

All necessary mechanisms can easily be embedded within that webpage, which allows us to build complex webapplications without any need for a backend server.

To prove the feasibility of this approach, this project contains a small example application in the form of a shoutbox: 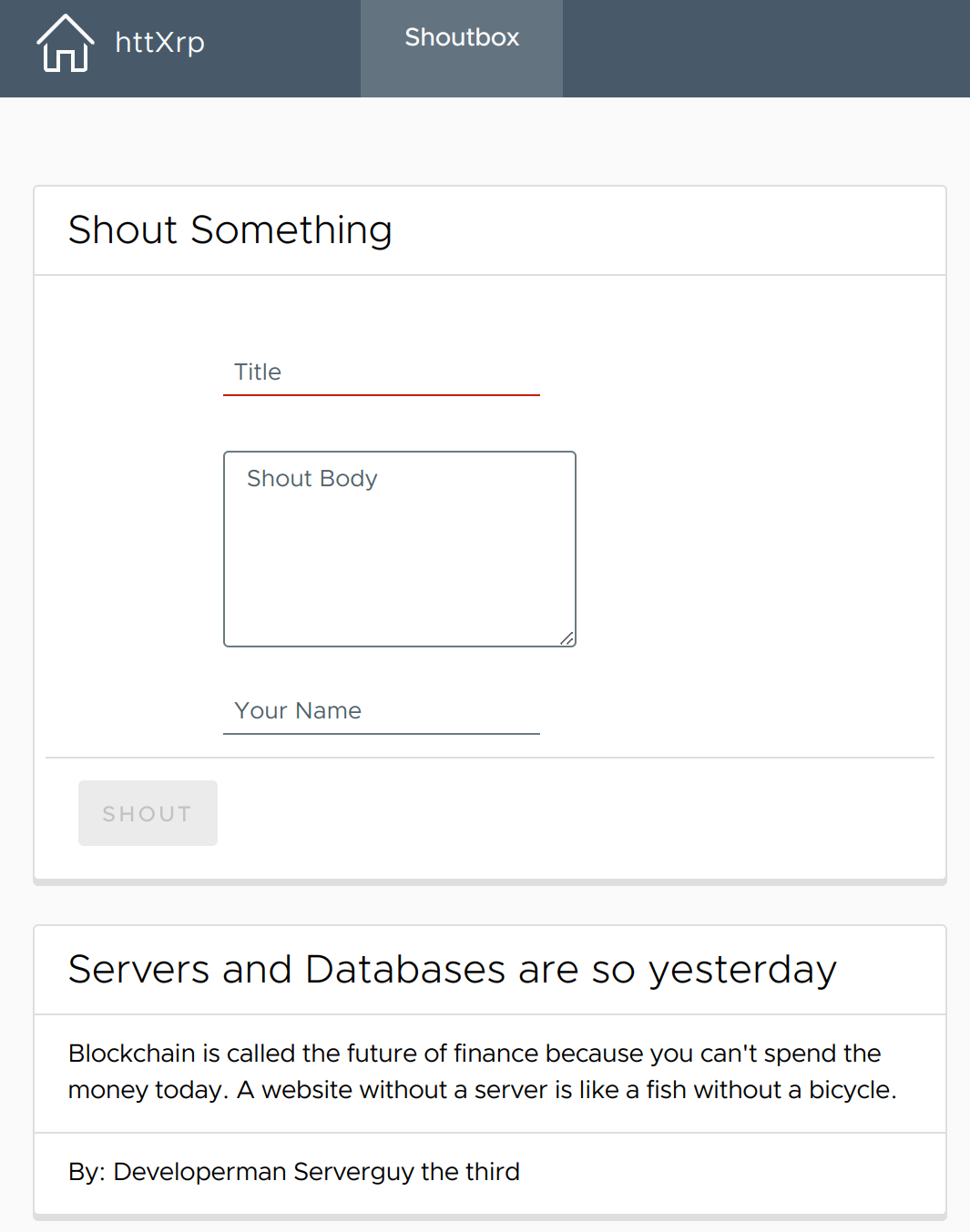 The exact procedure is more easily explained in code than visually. The presented code snippets should be considered pseudocode, but if you’re interested in the exact steps please take a look into ShoutboxData.service.ts. The actual implementation isn’t any more complex than the steps below but they were altered for readability reasons.

Submitting a new shout to the shoutbox